Cadmus brought the first alphabetic writing to the Greeks which consisted of sixteen letters. It was the very first foundation of alphabet in the western world that we know today.
Cadmus was a unique character among Greek heroes.
Cadmus was the only one among accepted and worshiped Greek heroes who was of different origin. Despite having Poseidon as his grandfather, it is said that first he was originally a resident of ancient Phoenician civilization and came to Greece in search of his sister Europe who was abducted by the king of the gods.  Cadmus also happened to become the founder of Thebes, after the consultation with the Delphic Oracle who told him to abandon his search for his sister and rather follow his own path. He was also a great warrior and a born leader, not to mention that he was very well educated.

Why we select his name for your company?

For us, he is the symbol of the transmission of knowledge between people. He provided the tool to permit this transmission like we want to provide the tools to our clients to reach excellence. 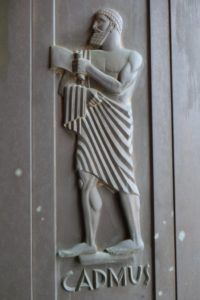